Tigerfrost is owned by Whiskers

Tigerfrost is a black smoke tom with pale blue eyes.

Tigerfrost is a taller warrior, standing on well-muscled legs and carrying an overall tank-like build. He's a powerful warrior born for close combat and short bursts of speed, not so much stamina. The tom has medium-length fur of a coal black base and silver unders, while also being dappled by darker mackerel tabby ghost stripes. As such, he can be classified as a black smoke, one without an ounce of white spotting. His pale blue eyes, however, are very peculiar for a dark cat. Since the fight with the badger, he carried a scar over his right eye.

In terms of personality, the warrior can be described as reserved and friendly, the perfect mentor for a young cat. He's dutiful towards his clan, however, he can be very defensive of himself because some believe his ambitions to be a little suspicious. He can be intimidating from time to time. Looks can be deceiving, and poor Tigerfrost is no exception. He's a workaholic with a rough exterior, but in truth, he's nothing but a cuddler.

The tom is relatively young and is therefore still developing his skills.

Tigger was born to a loner mother and an unknown father alongside his littermate, Shadow. However, one thing lead to another, and Tigger was stolen away by another loner family. He was raised secretly as one of their own without knowing his true past, or that he's brothers with Shadow.

He did recently, however, learn about his true father, a cat that once belonged to a clan. So, Tigger has set off to join the clans, in hopes that he can uncover more about his biological father. He joined CloudClan, in hopes of starting his journey there.

Thanks to his fur, Tigerfrost overheats after his patrol, so he rolls in the snow to cool down. He has a brief conversation with Deadmist before the medicine cat, Vixenleap, screams outside of camp. He goes to investigate along with Deadmist and Hayleap only to find blood, so he and Hayleap run back to camp to report to Willowstar. But before he can catch his breath, poor Tigerfrost is sent back out again. In the end, his firsthand witness of the attack is rejected by the leader, who instead believes in Hayleap, who proceeds to blame the assault on Deadmist. The loner is exiled as a result.

Tigerfrost is taken by surprise when he is given ex-loner Smokepaw as an apprentice. The tom is gruff with him, but the warrior makes it clear that he still has much to learn about the code. While out training, they find the dead body of Cloverfur, where Smokepaw learns the importance of mourning in clans.

The warrior attempts to be kind to Duskblossom on several occasions just because he's a "good cat", but she frequently rejects his kindness. They eventually go hunting and she refuses to assist the nearby patrol as they are charged by a badger. Tigerfrost cracks and snaps at her, discovering that she fears failure. He promises to help her, and when they do, he nearly loses his eye from the badger attack.

While he's recovering, Duskblossom steals him from camp to tell him about his father and real biological mother. He's shocked but overjoyed with the news, but can't learn much more as Duskblossom runs off. Tigerfrost finds Heatherpaw in the river and pulls her out before he returns to camp.

The tom knows little about his father, save for what Duskblossom was willing to release to him. Regardless, he thinks that his sire sounded like an amazing cat that he would have absolutely loved to have known. Understanding that such a great cat is dead leaves him very crestfallen, but he is optimistic that they will one day reunite in StarClan.

Tigerfrost only recently learned of his brother, but he still hasn't heard his name.

Tigerfrost finds himself feeling very skeptical about his leader, and sometimes regrets joining her clan given the she-cat's condition. He once respected her words and considered her wise upon first arriving, but he has recently changed his view on the she-cat. He finds her unfit to lead considering her condition, and fears that she might be bias against him due to his background as a loner.

Although his interaction with the distant CloudClanner was brief, Tigerfrost does not see the spotted she-cat as a threat to the clan, as some others might view her. The warrior feels guilty to see the warrior exiled despite his attempts to help, but he's pretty certain that she could handle herself just fine. He considers her to be mostly an acquaintance.

His apprentice seems a little rough around the edges, but Tigerfrost is confident that he'll make a good warrior. He acknowledges that all cats have their flaws, and that Smokepaw isn't likely to be the "cuddly" type that his mentor is. So, he respects the boundaries of his apprentice, and is willing to work with him to aid him in becoming a warrior in any way possible. 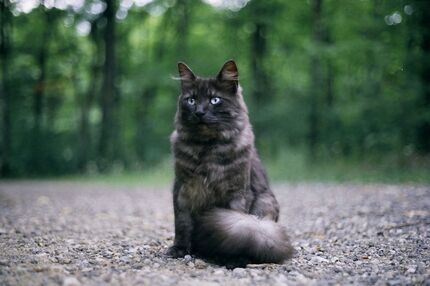 Retrieved from "https://warriors-roleplay-wiki.fandom.com/wiki/Tigerfrost?oldid=8389"
Community content is available under CC-BY-SA unless otherwise noted.